Getting to the Root of Niceness 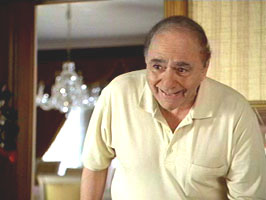 You learn a lot by studying the history of a word. The Latin root of “nice” is nescius (picture Toula’s father Gus in My Big Fat Greek Wedding explaining this…) from ne meaning not and scire meaning to know. To be nice was akin to being ignorant or clueless.

Nice landed in France where, in the 12th century, it meant “weak, needy, stupid, silly.” It then hopped the English Channel where Chaucer liked his girls “nice” (wanton, lewd, lustful, and extravagant) and Shakespeare used nice to describe fools.

Now in the 21st century, many English professors ban the use of the word “nice” because it means everything and nothing in a fuzzy, diluted way. Even in medical terminology, NICE is an acronym for noninvasive conservative treatment or a nice way of saying “not much.” For many of us, our acronym of N.I.C.E. would be “Nodding, Invisible, Compliant, Exhausted.”

But surely, there’s a nice definition of “nice” in the Bible?

Nope.  As I mentioned in my first post, you can’t find “nice” in the Bible because it’s not there. The closest word may be “meek.” Whereas “nice” has come to mean pleasant with a side of people pleasing, the biblical meaning of meekness isn’t what we now think of as weakness but is strength under control. Jesus, who describes himself as meek and promises that the meek will inherit the earth, didn’t come to please people but to please his Father.

“Meekness is an active and deliberate acceptance of undesirable circumstances that are wisely seen by the individual as only part of a larger picture. Meekness is not a resignation to fate, a passive and reluctant submission to events. . . (the meek are) the strong who have been placed in a position of weakness where they persevere without giving up.” (www.biblestudytools.com)

That nothing/everything word, nice, begins early and finds its way into many a baby’s nursery.

This is what Bethany Hamilton, the young surfer who survived a shark attack, thinks of “nice:” 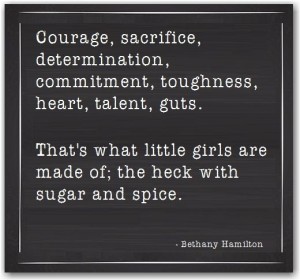 That’s what rock-the-boat girls (and boys) are made of.

So what are you made of? What do you want to be when you grow up? More on that in my next post.

4 Comments on “Getting to the Root of Niceness”