My new year’s resolution is to stop being so “nice.”

Don’t get me wrong. I’m not going to start being nasty.

It just means I don’t want to end up with this on my tombstone: 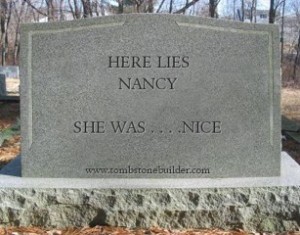 Of course, I couldn’t get to this resolution until February because there were just so many demands and needs. (Other nice people know the struggle.)  So I decided I’d give up being nice for Lent. And beyond.

Based on my subconscious mantras, being nice seems to have been my goal for a long time.

Smile, nod and get along.

Say “I’m sorry” as my auto-response.

There’s probably deep reasons why I’ve made it my life mission to be nice; psychological terms like people-pleasing, co-dependency, low self-esteem, and “chicken-hearted cringer.”

Maybe I thought being nice was the “Christian” thing to do and would get me Brownie points or martyr merit badges. But being “Christian” means there are no “merit” badges ever again.

Do a word search for “nice” in the Bible.  It’s not there.

The Bible is filled with words like good, kind, compassionate, courageous, gracious, sacrificial, loving, faithful, forgiving. But not “nice.” Not even in the ASV (American Southern Version).

Maybe you’re wondering “What the heck is so wrong with being nice?” and that the only other tombstone option for me after this year will be “Here lies Nancy. She was a . . . (it rhymes with witch).” I’ve asked the same question. Until this past year, when I began seeing some non-nice people happily moving on after they left me carrying their baggage and thanking them for the chance.

Although it’s been 20 years since I read it, I clearly remember a scene from Anne Tyler’s novel, Ladder of Years, where Delia Grinstead, the “nice” middle-aged wife and mother with a nearly empty nest walks away from her family while on a beach vacation. What struck me was that neither her husband nor any of her three children could describe her to the police searching for her, even to the color of her eyes. She had become invisible or as she described herself, “a tiny gnat, whirring around her family’s edges.”

Because I don’t want to end up the family gnat, 2016 will be the year to start rocking the boat.

So this is a blog for all you frustrated nice boys and girls to join me in breaking free from bland niceness to a braver, scarier life where you don’t defer your own dreams and may even make people angry in the process. But at least they’ll remember the color of your eyes.

Take this year to figure out who you want to be when you grow up (you still have time no matter your age) and what you want on your tombstone.

P.S. Talking about tombstones. If Jesus had one—which thank God he doesn’t—it wouldn’t say “he was . . . nice.” It would read: